What's on your mind?

Did they ever revile why John Barnaby was suspended? In Death in the Slow Lane Ben Jones found out about it and at the end John mentions it.

I have thoroughly enjoyed watching all the series of Midsomer Murders. However, it is unfortunate that since Brian True-May left the series, the stories have been going downhill fast - long-winded and just plain boring! Season 21 is woeful. I watched the first two episodes of season 22, and again, very disappointed. One noticeable factor is that some of the actors are inappropriate for a particular part. The latest pathologist is annoying with her sarcasm which is inappropriate for a mature person. Such a shame!

Hi :) when I was a kid my mum always used to watch the show and I enjoyed watching it with her. I vividly remember a scene (maybe towards the end of the episode) where a lady gets a really creepy phone call that really scares her. I remember the phone to be a white landline and the lady to be maybe around 60 years old. I remember the voice on the other end almost sounding like a duck? I can’t find it anywhere online and it’s been bugging me for years.

Does anyone know when season 22

I've worked on a map of Midsomer extending the already existing maps with all the villages appearing in the the further episodes. Took me about 40 hours and this wiki was a really great help :-)

Bad News...I will not sell prints of this map...Good News...I want to provide a place, so that everyone can download the map in high resolution to make his own print :-)

But I need some help

- Beside all the villages I've added some points of interest to the map. If you think some point of interest is missing, please feel free to comment.

- Any other ideas are heartily welcome

And another question: Will it be possible to create a side here on the wiki to provide people with high resolution jpgs? 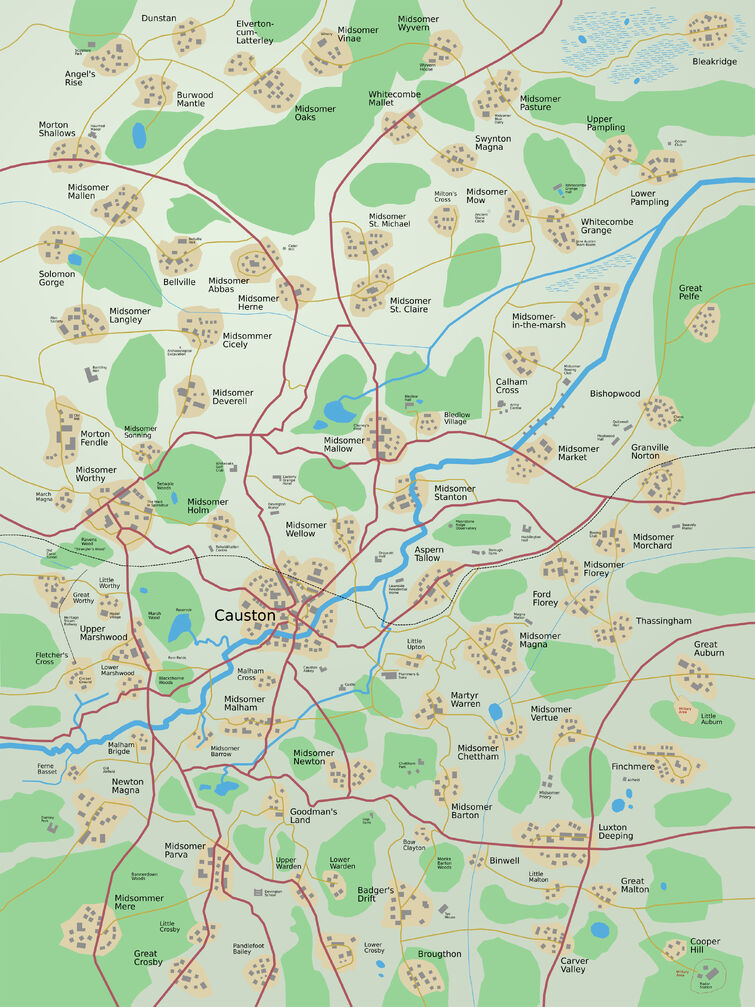 Has anyone noticed that Tom seemed more abrasive and fiery in the earlier episodes, such as when he threatened to wipe the fake bruises off that female who feigned injury, and he was quite fiery in that episode, but by Garden Of Death, he had mellowed a bit and was more tactful. From then on, Barnaby then spoke is a lower voice at work but with Joyce and family he seemed more chatty.

MM is quite good with giving ages and DOB's of characters, we know Tom Barnaby was born in 1943, same as the actor. I guess John Barnaby his cousin was born about 1965. Also several ages of the guest characters have been mentioned. Would the profiles for the guesties have room for their approximate DOB, such as Muriel Harrop was 80 in Blue Herrings, shown 2000 (but probably set 1999), so she was born about 1919, as I think many eps are set months before transmission date.

I am a bit of a buff when it comes to ages of characters in TV shows, I also love Corrie, Emmerdale Aussie TV show Neighbours.

When a season has to be 4 episodes why don't they just break up two episodes into a part 1 and part 2, so they end up with six episodes total for the season. I so look forward to this show so much that the more I have to watch the better.

I remember an episode where 3 children, a confident little girl, a giggling maniac, and a quiet boy. It turns out that they together killed every man talking to their mother as they didn't want them to take their mother away. Eventually they kidnap Barnaby as they think he'll be a good father..! The episode is ridiculous and I love it, do any of you remember what it was called?

Also, let's recommend the series to Pushing Up Roses, she says "The more murders in an episode the better", which is basically this series so..!

Scott wakes up in his flat after falling asleep after a few drinks and there is a film on the TV featuring a ventriloquist 's doll, trying to find out the name of the film please. Thank you for any help, apologies if this has been asked previously but I have only just started watching the show although now I wish I had watched it when it was first broadcast.

(edited by Kneelc)
Ghosts of Christmas Past

Barnaby is quite right to rethink the "natural death" of Sir Freddy Butler from myocardial infarction whilst at Dinner with his family.

The "Mona Lisa' like enigmatic smile from Lady Annabel Butler in the police car, in conversation with Barnaby shortly after her arrest, did seem to indicate that there might more to his heart attack than met the eye.

Well I have done some research and I think that I can add some good circumstantial evidence that Lady Annabel did in fact poison him. Not only that, but I can tell you what she used as the poison.

The an extract from the widely distributed Afican plant Adenium obesum, was used as an arrow poison in Sudan, Somalia, Kenya, Tanzania, Cameroon and Nigeria.

The plant contains 30 cardio-toxic glycosides which act in a pharmacological manner to Digitalis. It acts on the Na+K+-ATPase enzyme that regulates the concentrations of Na+ and K+ ions in body cells and also modifies the Ca++ concentration.

In low doses,its western cousin Digitalis, is used to treat congestive heart disease and heart rhythm problems. In high doses it leads to systolic heart failure and death this can be anything from 2 to 8 minutes in humans depending on body weight.

The poison can be extracted and refined (I will NOT describe the process for obvious reasons!) to create an odourless tincture that is applied by a range of tribes including the Hadza to their hunting arrows. The plant can easily be dried and transported and stored. Usually wrapped in cloth to keep it away from daylight.

It is my belief that Lady Annabel, for some reason brought this plant back from Kenya. She extracted the poison and "at some point" managed to get it into Sir Freddy's body. Maybe before dinner in his drink.

There is no fault on George Bullard for failing to find the metabolites of this poison in Sir Freddy's system as he simply wouldn't have any reason to run that kind of toxicological screen given what appear to be the straightforward natural death of an elderly over indulgent person whose heart was not in a good state.

Lady Annabel using considerable cunning pulled off the "perfect" murder. However maybe her vanity overcame her she couldn't resist giving Barnaby that enigmatic smile when he re-stated what he believed to be the fact that Sir Freddy died a natural death.

I faintly remember an episode that ended with either Troy or Jones being hit in the back of the head (pretty badly as far as I remember) and tied up in a warehouse or something like that, and that Barnaby came and talked to the murderer and saved the day.

I just CANNOT find it and it's driving me crazy xD

Ps. it's NOT the "last man out" episode

Does anyone know how many bodies Joyce Barnaby has found?