A Rare Bird is the eighth episode of the fourteenth series of the popular ITV crime drama Midsomer Murders and was originally aired on 11th January 2012.

A row between keen birdwatchers in Midsomer-in-the-Marsh turns nasty when their president is killed. Patrick Morgan met his death while hoping to sight a rare bird, but is his obsession with ornithology to blame – or something more sinister?

DCI Barnaby and DS Jones investigate the murder of Patrick Morgan, president of the Midsomer-in-the-Marsh ornithological association. Morgan wasn't very likeable and was downright nasty to people, including his wife Nina. He suspected her of having an affair after she announced she was pregnant - he knew he could not be the father as he had a vasectomy some years ago. He had also challenged Ralph Ford's claim of having seen a blue-crested hoopoe, a bird that is native to Uganda and had threatened to sue local farmer George Napier if he went ahead with a drainage project. Nina was a former prima ballerina and with former professional musician Michael Hipsman, now a bookshop owner and member of bird-watching society, teaches ballet classes locally. Nina hasn't been truthful with the police and finally tells them who fathered the child she is carrying. When he too is killed, the police have to look elsewhere for the culprit.

Patrick Morgan
Lured into the woods with a rare bird hotline alert on his phone, trapped in a birding net, beaten with his bramble beater and thrown in the lake where he drowned.

Dr. Markham
Lured into the woods with a medical emergency phone call, trapped in a birding net and then shot twice in the chest with a shotgun. 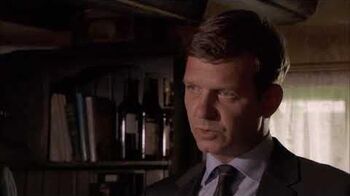 Retrieved from "https://midsomermurders.fandom.com/wiki/A_Rare_Bird?oldid=25902"
Community content is available under CC-BY-SA unless otherwise noted.