Renny Rye
A Sacred Trust is the seventh episode of the fourteenth series of the popular ITV crime drama Midsomer Murders and first aired 26th October 2011.

DCI Barnaby and DS Jones investigate the cloistered world of Midsomer Priory when a nun is strangled to death. The detectives uncover a complex mystery involving holy orders, teenage romantic liaisons, African art and missing antique silver as the community is forced to open its doors to 21st-century policing.

DCI Barnaby and DS Jones investigate a murder at Midsomer Priory when Mother Thomas Aquinas is found strangled in the chicken coop. Jones had been to the priory earlier after hearing that a stained glass window had been vandalized but the Prioress, Mother Julian, had refused to admit him. The priory had been donated to the Order of Ste. Mathilde two centuries ago and with the death, only three nuns now remain: the Prioress, the wheelchair-bound Mother Jerome and Sister Catherine who is only one week away from taking her final vows. The priory has few visitors the most frequent of which was their chaplain, Father Behan. Aside from the the priory, the nuns also had a valuable collection of silver which included a chalice, two candlesticks and an engraved paten. These have now gone missing, presumably stolen by whoever killed Mother Thomas. It's all too simple for Barnaby. A second murder, a possible inheritance and a deep, dark secret from 30 years ago are all possible leads to identifying the murderer.

Mother Thomas Acquinas
Strangled as she was locking away the chickens. (Not the intended victim)

Father Behan
Strangled and was found sitting in his chair. 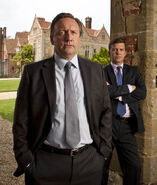