Beyond the Grave is the fourth episode of the third series of the popular ITV crime drama Midsomer Murders and was originally aired on 5th February 2000.

Barnaby and Troy are called in to investigate at the museum in Aspen Tallow when the painting of a local historical figure, Jonathan Lowrie, is slashed. When the museum's curator is subsequently assaulted and Lowrie's direct descendant is murdered, the detectives must unravel another mysterious knot. Barnaby does focus on one important clue, however: a packet of smoked mackerel inadvertently dropped in the cemetery. Meanwhile, they are joined by Nico, Cully's actor boyfriend, who has landed a part in a TV series as a detective sergeant.

Marcus Lowrie
Beaten with a slide projector while looking inside Jonathan's grave.

James Tate (also known as Michael Aron Whistler)
Bludgeoned (possibly with a hammer) and then buried in the grave that was dug for Marcus Lowrie. 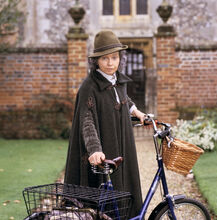