Peter Smith
Blood Wedding is the second episode of the eleventh series of the ITV crime drama Midsomer Murders and was originally aired on 6th July 2008.

Cully is finally getting married and Tom Barnaby is anxious to keep costs down as Joyce brings in a camp wedding planner. More dramatic is the union between aristocrat Ned Fitzroy and Beth Porteous when maid of honour Marina is found skewered to a wardrobe in one of the bedrooms. The Fitzroy family's lordly attitude does not help the investigation and then estate manager Robin Lawson and old family servant Peggy are both murdered. Barnaby discovers that both were aware of a sinister Fitzroy family secret, culminating in the events of the Blood Wedding.

Marina Fellowes
Stabbed with a knife through the chest and pinned to the wall.

Robin Lawson
Shot in the heart with an arrow.

Peggy Benson
While she was sitting in her armchair, was held from behind and stabbed with a hat pin that was pushed through her ear. 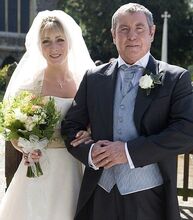 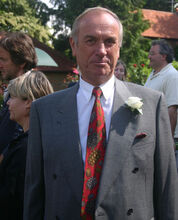