Blood on the Saddle

Blood on the Saddle

Ford Florey is a town with a Wild West Society and many grudges. During a Wild West show at the local faire, the witch on the 'Dunk the Witch' stall is well and truly dunked. Laughter turns to horror when she does not get up and the water in the tank starts to turn red. DCI Barnaby and DS Jones need to be quick to track down the murderer.

Tom and Joyce Barnaby attends the village fête in Ford Florey and the DCI soon has two murders to solve. The fête has an American Wild West theme but the first victim is Faye Lennox who was dressed as a witch and working at the dunk tank. She was shot however and nothing out of the ordinary was heard given the show that was going on at the same time. Lennox was having an affair with local landowner Jack Fincher, something that was generally known in the village and also by his wife, Susan, who was sitting with Tom and Joyce at the time of the shooting. Then Jack Fincher is later found dead having been roped and dragged through the fields. Fincher was known to have been in a dispute with his neighbour, Silas Burbage, over the ownership of a piece of land. The ownership issue is coming to a head as the leader of a group of travellers, Dan Malko, is keen to purchase the property for his group. Two more deaths and a near-deadly attack will occur before Barnaby sorts it all out.

David Langham
Died of natural causes after being evicted from his cottage on Fincher's land. This occurred when he was 84 years old.

Faye Lennox
Shot through heart while sitting in the Dunk Tank with a shotgun loaded with 44-40 WCF (Winchester Centre Fire) bullets.

Jack Fincher
Dragged to death by ankles after being roped by a horeseman.

Leo Fincher
Shot in the chest with a pistol loaded with 44-40 WCF (Winchester Centre Fire) bullets while he was riding his horse, then tied to it and the horse roamed all night with his body in the back. In his hand was put a deck of aces and eights ("Dead man's hand" - Tom Barnaby).

Fergal Jenner
Stabbed in the chest with a Bowie knife. 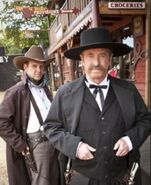