Blue Herrings is the second episode of the third series of the popular ITV crime drama Midsomer Murders and originally aired on 22nd January 2000.

While taking a week off to move into their new home, DCI Barnaby takes time to visit his aunt, Alice Bly, who is staying at a local convalescent home for a few weeks. She tells him that a resident died there the previous evening and at least one other resident believes it was murder. When the home's administrator tells Barnaby that residents' personal effects are going missing, he gets DS Troy to look into the goings on at the manor. When a second resident is found dead soon after, Barnaby begins to suspect that something is amiss.

Mrs. Mortimer
Died of natural causes several weeks prior to the events of the episode.

Muriel Harrap
Found dead in the elevator. Said to be natural causes.

Madge Fielding
Fell dead while being surprised by an intruder in her room.

Celia Armstrong
Smothered with a pillow while she was sleeping. 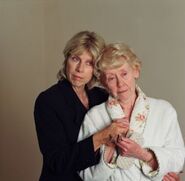 Retrieved from "https://midsomermurders.fandom.com/wiki/Blue_Herrings?oldid=25250"
Community content is available under CC-BY-SA unless otherwise noted.