Detective Sergeant Daniel 'Dan' Scott first joined the Midsomer team in 2004, in the episode, Bad Tidings, where he was thrown straight into a murder investigation. One of the first things that his new boss said was, when looking down at the dead body of a woman, "By the way, welcome to Midsomer." Not much is known about Scott's life before transferring to Midsomer but we do know that he worked for the Metropolitan Police Service in London. In the episode Midsomer Rhapsody, it is revealed that his mum was a fan of the titular music, 'Midsomer Rhapsody' and that she played it whenever "she wanted us out of the house" implying that Scott must have had siblings. He is also shown to be cocky and sarcastic, one of the lines being "Where I come from, Open Garden Day is where someone breaks into your shed." In Bad Tidings, he also flirts with Barnaby's daughter, Cully who has also organised a school reunion with some old school friends. When they have a picnic by the lake, Cully's friends try to drown her and Scott comes to the rescue. He refers to Midsomer as the sticks and has a somewhat awkward relationship with DCI Barnaby, although it gets better as the series progresses. In The Straw Woman, Scott develops a love interest who is subsequently brutally murdered. This episode is notable for Barnaby's lack of sympathy with Scott's situation. Scott's departure from the show was also abrupt. In The House in the Woods, Barnaby describes Scott as being ill. Barnaby invites PC Ben Jones to assist him on that case. After this incident, no more is heard from Scott and Jones becomes the new assistant.

Scott is sarcastic, cocky and sometimes outright rude though he does have a softer side we rarely see. In appearance he is devilishly handsome, is tall (6'2") and quite athletic with dark hair and brown eyes which portrays as an inconspicuous type. Scott is also a fan of a brown suede jacket which we see in a number of episodes.

He is his superior. When they first met, Barnaby was not amused by his late arrival and his non-commitment to working out in Midsomer. Throughout the season, Barnaby does warm up to him as seen when Scott goes to the Barnaby's house for dinner.

In The Straw Woman, Scott fell for a school teacher, Liz Francis. However, she soon ended up brutally murdered after being knocked out and burned alive, leaving Scott clearly devastated. Barnaby was annoyed by the fact that he wasn't using his head. 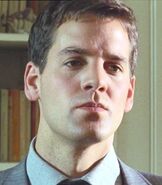 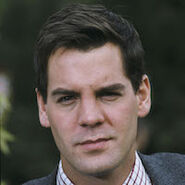 Add a photo to this gallery
Retrieved from "https://midsomermurders.fandom.com/wiki/Dan_Scott?oldid=12894"
Community content is available under CC-BY-SA unless otherwise noted.