Simon Langton
Dark Secrets is the second episode of the fourteenth series of the ITV crime drama Midsomer Murders and was first aired 30th March 2011.

The reclusive lives of elderly eccentrics William and Mary Bingham comes under police scrutiny when a social services investigator is murdered. DCI Barnaby and DS Jones must unearth generations of family secrets and decipher astronomical charts to find the killer.

When he tries to see William and Mary Bingham, county social services officer Gerry Dawkins is promptly thrown off the property by the Bingham's daughter Selena and her husband Eddie Stanton. The same day, he visits a local artists' colony where he asks the residents to register with the local authority. They welcome him by gently tossing him in a nearby duck pond. The fastidious Dawkins complains to the police and, as a result, Barnaby and Jones visit both the artists' colony and the Binghams. They have a murder to investigate when, two days later, Dawkins is found floating face down in the river. After learning a good deal of village gossip, Barnaby looks for the medical report into the death of Robin and Jennifer Bingham over thirty years ago. He finds there is no autopsy report on Jennifer as her body was never found. He believes she is still alive, but there will be another death before he ties it all together.

Bertie Morell
Unspecified death related to alcohol in the '60s.

Robin Bingham
Drowned after crashing his car into a river in 1975. Accidental death.

Gerry Dawkins
Threatened with a shotgun to get inside his canoe, then struck in the back of the head with the shotgun's butt. The canoe overturned, he fell facedown in the river where he drowned and the current took him downstream where he was found.

Mary Bingham
Heart attack after being crushed by a big stack of newspapers which were pushed onto her.

Dr. Frost
Heart attack after being questioned by DS Jones. 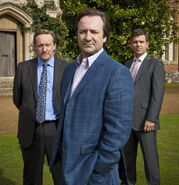