Renny Rye
Days of Misrule is the sixth episode of the eleventh series of the popular ITV crime drama Midsomer Murders and first aired on 5th July 2008.

In the run-up to Christmas, Barnaby and Jones find themselves, thanks to their very young 'wonder boy' chief superintendent, on a team-building exercise at the local Territorial Army Centre, run by Matt Parkes. Colonel Parkes is a highly respected man, unlike his womanizing waster of a son, Jamie, who is hated by all, even Caroline, his grandmother, whose daughter died giving birth to him. Especially bitter is Penny Galsworthy, wife of another T.A. officer and garage owner Tim, whose daughter killed herself after being impregnated by Jamie, and she stalks him obsessively. George Barkham, another soldier, missed out on being promoted to a partnership at Matt Parkes' haulage firm, thanks to Jamie, who is also blackmailing George's daughter. The Parkes' yard is torched, causing an explosion and a watch-man almost killed. Then a criminal associate of Jamie and Jamie himself both meet their maker in quick succession. Ultimately Barnaby has the sad duty of arresting somebody who has rid the community of a waste of space after several Days of Misrule.

Gilly Galsworthy
Committed suicide by hanging herself in Calham Woods 2 years ago.

Alec Grainger
Clubbed with the butt of a gun during a fight, then put in a large toolbox and sunken in the river.

James Parkes
Stabbed in the heart with a military pocket knife. 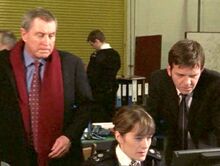