Jeremy Silberston
Death's Shadow is the first episode of the second series of the popular ITV crime drama Midsomer Murders and was originally aired 20th January 1999.

Barnaby and Troy investigate the murder of Richard Bailey who is found in his home in Badger's Drift hacked to death. Bailey had recently received bad news from his doctor who informed him that he had a brain tumour. There are many possible suspects, including villagers who oppose Bailey's plan to redevelop a major property, Tye House, into a golf course and residential housing estate and his childhood friend, Ian Eastman, who lost out on an opportunity to develop the new property. Cully Barnaby gets an opportunity to work with Simon Fletcher, a one-time resident of Badger's Drift who is now a well-known director and also happens to be a childhood friend to Eastman and Bailey. When a second murder is committed, the detectives must find a motive that is linked to events some 30 years earlier.

Felix Bryce
Put on top of a chair and had a rope tied around his neck and to a tree branch. The chair then lost balance and fell, making Felix to remain in the air and accidentally hang himself 30 years ago.

David Whitely
Locked inside his trailer while he was sleeping and burned alive after the trailer was set on fire.

Simon Fletcher
Shot in the back with an arrow. 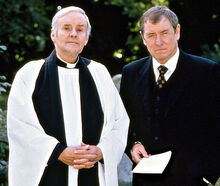