Sarah Hellings
Death and Dust is the fifth episode of the tenth series of the popular ITV crime drama Midsomer Murders and was first aired on 8th May 2007.

DCI Barnaby and DS Jones investigate the death of Dr. Alan Delaney who was purposely run down by someone driving a pick-up truck. Delaney was driving Dr. James Kirkwood's brand new SUV and Barnaby believes Kirkwood may have been the intended victim. He does not have to look far to find anyone who would like to see Kirkwood dead. Jim Kirkwood and Delyth Mostyn had only recently announced they were to be married. Both had been married previously but Kirkwood is a widower and Mostin divorced. Dorothy Hutton had asked Barnaby if it is suspicious that her son-in-law James is remarrying a mere four years after his first wife, her daughter Sarah, died. Barnaby assures her that Sarah's death was fully investigated and James Kirkwood was nowhere near her bedside at the time of her death. Delyth Mostin's children are nearly apoplectic at the thought of their mother remarrying and are absolutely opposed to the union. Then there is Clifford Rawnsley, a local farmer who had pursued Delyth but whom she rejected. The case is not quite so simple however. Meanwhile Cully and Joyce try to convince Barnaby that their garden patio needs to be enlarged. It actually provides him with the vital clue needed to solve the case.

Sarah Kirkwood
Unspecified suicide with help from Alan, due to being in pain from her fatal illness. This took place 4 years ago.

Alan Delaney
While driving Dr. Kirkwood's car a tree branch fell and blocked the road making him to crash the car. As he came out to inspect the damage was intentionally thrown off the road by another car and broke his neck. (Not the intended target) 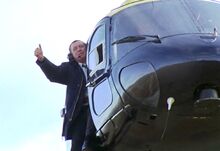