Death and the Divas

Death and the Divas is the fourth episode of the fifteenth series of the popular ITV crime drama Midsomer Murders and was originally aired on 2nd January 2013.

The murder of a journalist has chilling echoes of a 1960s horror film starring Midsomer's own Stella Harris. When Stella's more famous sister returns after a 40-year family rift, the killings escalate, each reminiscent of a movie plot. Is life – and death – imitating art?

In Midsomer Langley, DCI Barnaby and DS Jones investigate the murder of writer Eve Lomax, who is found in a pool of blood in her home. She was found by her landlord Patrick Tilman and was writing a book about local 1960s film star Stella Harris and her more famous sister Diana Davenport, also an actress. In fact, at the time Lomax was found the Midsomer Langley Film Society was holding a festival in Stella's honor when Diana unexpectedly arrived. Dr. Wilding determines that Lomax bled to death as a result of two vampire-like puncture wounds her neck, much like some of the characters in one of Stella Harris' old films. Stella's daughter Emma knew Lomax from school days but there is soon a second and then a third death, both patterned after one of Stella's movies. A attempt on a fourth person leads to solving the murders.

Eve Lomax
Stabbed in the neck with a carving fork to make it look like a vampire bite.

Cy Davenport
Stabbed in the back with a carving knife and then fell over a stair railing unto the floor below.

Colin Yule
Brought in a state of unconsciousness by unspecified means, then put on a chair and he suffocated from being wrapped up like an Egyptian mummy.

Each murder is a copy of the plot of a film in which Stella Harris played. 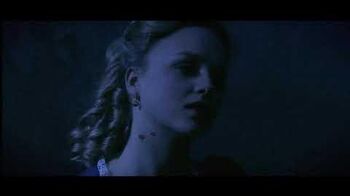 Retrieved from "https://midsomermurders.fandom.com/wiki/Death_and_the_Divas?oldid=26021"
Community content is available under CC-BY-SA unless otherwise noted.