DCI Barnaby and DS Troy investigate the murder of Gregory Chambers who was killed when out in the woods mushrooming. He was one of four people who had recently inherited a portion of his employer's estate, principally a local hotel. With his death, his one-quarter share now passes to his wife, Suzanna, who has been having an affair with Tristan Goodfellow. It would also appear that Gregory was having an affair with Annie Tyson, who is four months pregnant. When Tristan is poisoned with a type of mushroom known as Destroying Angel and the other inheritors of the estate are put at risk, Barnaby looks to find a common connection.

Karl Wainwright
Suffocated with a pillow.

Gregory Chambers
Shot with an arrow in the chest. He was later dismembered from his traceable parts with a hacksaw and sunken in a lake.

Tristan Goodfellow
Consumed a poisonous type of mushrooms, Destroying Angel, which were placed for him to cook instead of regular mushrooms.

Kenneth Gooders
Crushed by a large drink cabinet while taking a drink after the screws that were pinning it to the wall were loosened.

Suzanna Chambers
Shot in the chest with a shotgun by Julia Gooders while trying to kill her with a knife after Suzanna received a supposed phone call from Julia, threatening to expose her and Julia received a phone call saying "You are next! I'm coming to get you!". 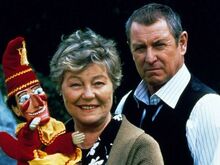