Four Funerals and a Wedding

Sarah Hellings
Four Funerals and a Wedding is the fifth episode of the ninth series of the popular ITV crime drama Midsomer Murders and originally aired on 12th June 2006.

Tom takes the family on an excursion when he is going to give an opening speech, accompanied by Joyce, daughter Cully and Joyce's mother, who is visiting, the Chief Inspector soon finds himself investigating the murder of Mildred Danvers, whose flask of brandy was apparently spiked with barbiturates. They were all there to attend the annual Skimmington Fair, a decades-old village fête that essentially pitted the women against the misogynist men. There are several suspects including Henry Marwood who returned Danvers' flask to her but did lie to the police about it; the local Doctor who seems just a tad too quick to pronounce the death to be of natural causes; and the Rev. Anthony Gant, who, in addition to being Mrs. Danvers' cousin, was also mounting a court action against the Skimmington women in a attempt to stop what he saw as the annual denigration of men. A second murder, this time from a target-shooting rifle, clearly puts Barnaby and DS Jones in the middle of a major investigation. A third death leads to the discovery of hidden family connections and the solution to the mystery.

Victims of the Marwood Manor Fire
In 1960.

Mildred Danvers
Drank Brandy from her flask that had been spiked with barbiturates.

Rev. Anthony Gant
Shot in the head from a church tower while riding backwards on a donkey as part of the demeaning Skimmington Ride.

Cathy Hewlett
Killed by a blow to the head with a blunt object, taken to the graveyard with a barrow, dumped into an empty grave and buried almost entirely.

Victims of the Marwood Manor Fire

In 1960 August the 15th at the Marwood Manor there was a terrible accident. A fire started, killing almost everyone that was inside.

The People who died in the Fire 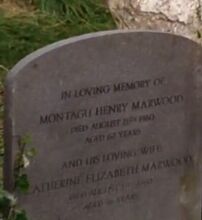 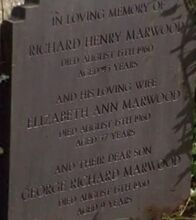 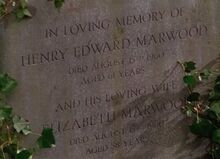 Retrieved from "https://midsomermurders.fandom.com/wiki/Four_Funerals_and_a_Wedding?oldid=28192"
Community content is available under CC-BY-SA unless otherwise noted.