Hidden Depths is the sixth episode of the eighth series of the popular ITV crime drama Midsomer Murders and was originally aired on 13th March 2005.

While it appears to be suicide at first, DCI Barnaby is quickly convinced by the evidence he sees that Nick Turner, a solicitor who lived in Midsomer Magna, did not walk off the roof of his home, but was dropped to his death. When it transpires that his neighbour, Jack Wilmot, has disappeared shortly after his death, both Barnaby and DS Scott begin a search for answers, and soon turn up rumours that Nick had lost money he had stolen from his clients' accounts. It's not long before their investigations turn sinister, when Nick's rival, Otto Benham, is brutally murdered after having wine bottles catapulted at him, all within view of his wife.

DCI Barnaby and DS Scott investigate the death of Nick Turner who fell - or was pushed - off the roof of his house. Turner was a well-known local solicitor but the investigation reveals that there is considerable sum of money missing from client accounts. As well, his downstairs neighbor, Jack Wilmot, has been missing since the day Turner died. Not only is Wilmot's wife Antonia acting strangely but Turner's wife may not be as aggrieved as she is making out to be. In searching for Wilmot, they also become suspicious of his team mates in the local pub quiz league, Otto Benham and Mike Spicer. When one of them is killed, the police are sure they are dealing with murder. The solution to the crime rests with locating a hidden wine cellar, uncovering a clever con and resolving a case of mis-identification.

Jack Wilmot
Lured to the attic of his house, knocked unconscious with a Cricket bat, stripped and dressed up in identical clothes that Nick would wear that morning. Then he was gagged and tied up, knocked out again, and finally dropped from the roof head first onto a stone patio to make it appear Nick committed suicide.

Otto Benham
Drank drugged wine, lured outside of his house where he collapsed onto a white target that was drawn on his lawn and pinned to the ground by croquet hoops. Then he was woken up and slowly killed by having bottles of wine thrown at him with an antique catapult.

Mike Spicer
Knocked unconscious with a pan, tied up and had his head put into a modified TV set. Then he was recorded and forced to take part in a Q and A, each "wrong" answer resulting in the TV set being slowly filled with wine, eventually drowning him. The "game" was named "MIKE SPICER'S GAME FOR YOUR LIFE", a pun on the show Mike used to present "MIKE SPICER'S GAME OF YOUR LIFE". 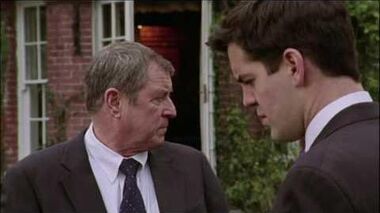 Retrieved from "https://midsomermurders.fandom.com/wiki/Hidden_Depths?oldid=26090"
Community content is available under CC-BY-SA unless otherwise noted.