Last Man Out is the third episode of the nineteenth series of the popular ITV crime drama Midsomer Murders and originally aired 11th January 2017. It featured the return of DI Ben Jones.

Tensions run high in Lower Pampling as a new type of cricket, the C-10, threatens a century of tradition. When star cricketer Leo Henderson is found dead following the tournament quarter-final, DCI Barnaby and DS Winter's investigation leads them into the path of a surprise visitor from Barnaby’s past, one "Jack Morris", who happens to be none other than an undercover Ben Jones, who is now a Detective Inspector.

Leo Henderson, star player of the Lower Pampling Panthers, is murdered following a one day tournament called C10, a format disapproved of by committee members St John Beachwood and retired player Germaine Troughton. Barnaby is mystified by the unexplained amount of cash in Leo's account and the appearance of an unshaven Ben Jones, calling himself Jack Morris and with Leo's widow Melody  when her house is burgled. New captain Fitz Theara, who is taking bribes to throw matches, is the next victim, leading Jones to explain that, with Germaine's cooperation, he is investigating match fixing. - a possible key to Leo's new-found wealth and the financial problems of C10 organizer Elliot Luthando. Whilst a twenty year disappearance is resolved, Jones' new role as the leading player makes him a likely target and, unless Barnaby unmasks the killer, the last man out.

Fitz Theara
Stabbed through the heart with a cricket stump. 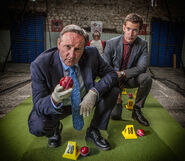 Retrieved from "https://midsomermurders.fandom.com/wiki/Last_Man_Out?oldid=26151"
Community content is available under CC-BY-SA unless otherwise noted.