Alex Pillai
Let Us Prey is the second episode of the sixteenth series of the popular ITV crime drama Midsomer Murders and originally aired on 8th January 2014.

A series of murders in Midsomer St Claire seem to be inspired by macabre images on a medieval fresco recently discovered in the church crypt. As the village prepares for storms and flooding it appears that someone is using ancient torture methods to punish modern-day ‘sinners’. But who is responsible and why?

In Midsomer St Claire DCI Barnaby and DS Nelson investigate the death of 28 year-old Nancy Dewar who is found in the water by river officers Ava Gould and Zach Lime. Her face had been covered with a burlap hood and Dr. Wilding finds that although she drowned, there is also evidence of blunt force trauma on the back of her head. She had recently separated from her husband Michael Dewar and had moved in with artist Philip Hamilton who is repairing a medieval fresco discovered by Rev. Martha Hillcott and handyman Frank Dewar in the basement of the local church. The fresco itself depicts a hooded woman, much like Nancy's. Two further murders suggest someone is imitating the death scenes in the fresco. The decision to sell a cottage owned by the church - and occupied by the now retired Rev. Arthur Gould, the church's longtime pastor - has also created ill-feeling in the community. Learning a long hidden secret however is the key to solving the crimes.

Sinners from the Fresco
Killed in various torture ways represented in the medieval fresco 800 years ago.

Nancy Dewar
Taken to the river and struck in the back of the head before having it covered with a burlap sack to make it look like one of the deaths in the fresco. She was then thrown in the river where she drowned.

Frank Dewar
Crushed by 2 tons of rubble which were dumped on him to make it look like one of the deaths in the fresco and left to bleed to death.

Philip Hamilton
Tied to his bed in his sleep with chains and impaled in the chest by heavy chandelier with a sharp spike which was released from above to make it look like one of the deaths in the fresco.

Victims from the medieval Fresco 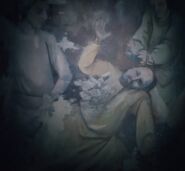 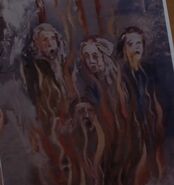 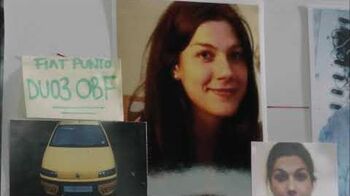