Richard Holthouse
Midsomer Rhapsody is the eighth episode of the eighth series of the popular ITV crime drama Midsomer Murders and was originally aired on 2nd October 2005.

DCI Barnaby and DS Scott investigate the murder of Arthur Leggott. The man had recently moved into a care home but was found dead in his house. He was a respected music teacher and had been a close friend of Joan Alder the late, great composer. There had been rumors that Leggott may have had in his belongings a rare piece of sheet music from Alder's early years. When such a piece turns up at auction, Barnaby is convinced it was stolen in the first place. Joan Alder's husband, her agent, a young woman who now claims to be her daughter, her putative father and an antique dealer are all suspects. As the death count rises the field of suspects narrows, but the solution lies in a letter handwritten by Joan Alder and the infatuation of someone who loved her in their youth.

Joan Alder
Died in a car accident by falling asleep at the wheel from an overdose of antidepressants and too much alcohol 20 years ago.

Arthur Leggott
Killed by a blow to the head from a torch.

Owen Swinscoe
While throwing up on the edge of a bridge from being drunk was approached and thrown off into the river where he drowned.

Harvey Crane
While riding his motorcycle at high speed, was beheaded by a wire that was strung across the road at the level of his neck. 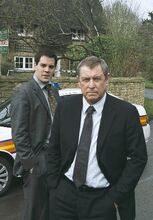 Retrieved from "https://midsomermurders.fandom.com/wiki/Midsomer_Rhapsody?oldid=27503"
Community content is available under CC-BY-SA unless otherwise noted.