Charles Palmer
Murder by Magic is the second episode of the seventeenth series of the popular ITV crime drama Midsomer Murders and was originally shown on 4th February 2015.

Pub landlady Hannah Altman is crushed to death whilst assisting illusionist Gideon Latimer at a charity magic show to raise funds for Midsomer Oaks church. The trick was sabotaged, suggesting that Gideon was the intended victim. He had received hate mail linking his act to Satanism and a particularly vocal critic is zealous curate Andrew Maplin. Certain robed figures conduct midnight rituals in the grounds of Gideon's mansion, once owned by an eighteenth century pagan and one of them kills Andrew, leaving his corpse on a stone altar. Hannah was having an affair as is Gideon's wife, widening the list of suspects, whilst the vicar's wife Lorna Soane is revealed as a descendant of the eighteenth century pagan. There is another slaying before DCI Barnaby works out who committed murder by magic.

Villagers of Midsomer Oaks
Killed in pagan rituals and sacrifices in the 18th century.

Sir Hugo Melmoth
Trapped and thrown into a fire on the 23rd of June 1802.

Enrico Latimer
Died of natural causes when Gideon was a child.

William Holt
Burned alive after the outbuilding where he was sleeping accidentally caught on fire from a firework.

Hannah Altman
Crushed by a suspended metal cage during a magic illusion after the cables that were holding it were blown up remotely.

Andrew Maplin
Phoned to be lured to a pagan ceremonial site and killed with a knife that was thrown into his chest. The knife was then brought out, his body was wrapped up like a mummy with a leaf mask on his head, put on top of the stone altar and finally stabbed in the chest again.

Annabel Latimer
Shot in the chest with a pistol. 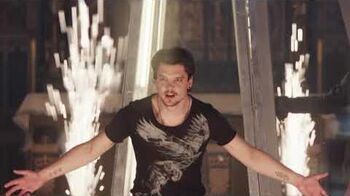