Murder of Innocence is the second episode of the fifteenth series of the popular ITV crime drama Midsomer Murders and was originally aired on 21st March 2012.

When a barrister is killed in Midsomer, suspicion falls on convicted murderer Grady Felton who was just released from prison. But Grady has a solid alibi. DCI Barnaby suspects he is working with an accomplice - until Grady himself is targeted in an arson attack.

A scarred and tattooed Grady Felton returns home to Binwell after serving time for the murder of village youngster Daniel Denning. He hopes to sell his old cottage but Daniel's extended family are angry that he has been allowed to come home.  The case was Jones' first murder as a PC and his sympathies lie with Daniel's Dad Ted, who owns the Binwell Estate, and Daniel's sister Deirdre. Memories are also raw for Mandy Gideon, who runs the Binwell shoot, and her sons Will and Kyle.

Meanwhile, the Chief Constable's fitness test is looming and Sarah persuades a reluctant Barnaby to come to military-style workouts run by Gareth Dunbar, a Scottish fitness trainer. Just as Grady returns, his defense barrister Giles Harrison is killed by a lethal dose of morphine. Grady had threatened Harrison and others - including Jones - but he has a strong alibi. Jones can't get hold of other people on Grady's hit list and is a bit jumpy. Meanwhile, a drugs trial is looming for another of Daniel's friends, Fred Burns.

Late one night, Grady's house is doused with petrol and set alight. Jones' girlfriend Susie, a fire-fighter, rushes to the scene but Grady is found in a coma. Mandy suspects Ted and is angry that he can't let go of the past. She feels sorry for Grady who was beaten by his Dad. Barnaby questions Burns on his way to court. He denies trying to avenge Daniel but £1500 cash was deposited in his account that morning. Could it be blood money? A pile of cigarette butts is also found under a tree by Grady's house. Someone was watching him.

In court an embarrassed Jones finds out that Susie is Burns' former girlfriend. But when he sees Susie outside court there's more bad news - another lawyer on Grady's list is dead. But again, it can't be Grady, who's in intensive care. Meanwhile, Gareth drops Sarah home after training and tries it on with her. Sarah is amused but Barnaby doesn't like it. According to Grady's interview from the original case files, Daniel was already dead when Grady found him and he suspected that Ted was the real killer. Back in the present day, Kyle is killed with an injection of morphine. Could a friend be acting out Grady's revenge plan for him?

Burns visited Grady in prison, as did Deirdre, but despite involvement in drugs, they both have alibis for the recent killings. Grady starts to regain consciousness but as Jones rushes to see him, he is almost hit by a speeding car. He gets to Grady's bedside to find that he has been killed. But how can Grady be on his own hit list?

Priot to the Episode

Daniel Denning
Struck and accidentally killed with the butt of a rifle 18 years prior.

Miss Felton
Died in a motorway accident with Ross after Grady's trial.

Ross
Died in a motorway accident with Miss Felton after Grady's trial.

Mrs. Mulory
Killed in a homicide incident 17-16 years prior.

Giles Harrison
Injected with a fatal dose of Morphine in the left side of the neck.

Caroline Garrett
While she was away the feed pipe to the gas fire in her house was tampered with, making the gas accumulating. When she got back and light up, the gas ignited resulting in her death by arson.

Kyle Gideon
Injected with a fatal dose of Morphine in the right side of the neck.

Keith Mulory
(posing as Grady Felton)
Injected with a fatal dose of Morphine while in the hospital after prior failed attempt to murder by arson on his home. 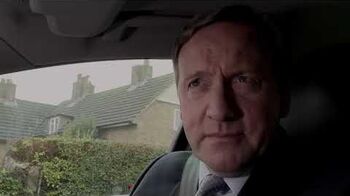 Retrieved from "https://midsomermurders.fandom.com/wiki/Murder_of_Innocence?oldid=26502"
Community content is available under CC-BY-SA unless otherwise noted.