Ralph Lyddiard is a character mentioned in the episode Written in Blood of the ITV crime drama Midsomer Murders. He was the brother of Honoria Lyddiard and the husband of Amy Lyddiard. It is supposed that his relationship with his sister was a good one, due to the fact that she adored him.

As a Sub-Lieutenant he traveled to Turkey with his ship Leicester, where he meet Gerald Hadleigh. At that time Hadleigh was already a transvestite. They became lovers, fact that remained unknown even to Honoria.

He became sick and died by AIDS prior to the events of the episode. Honoria took Amy in the Lyddiard manor to protect her, but in fact only wanted to keep Raplh close trough her. Also she never missed a chance to accuse Amy of her brother's death.

Unknown to Amy, Honoria took Ralph's body and put it in a bed inside a locked room in her manor. 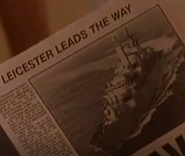 The Leicester as shown in the Navy News 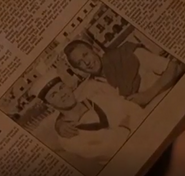 From left to right: Ralph Lyddiard and Gerald Hadleigh, as shown in the Navy News

Amy Lyddiard finding Ralph's body.
Add a photo to this gallery
Retrieved from "https://midsomermurders.fandom.com/wiki/Ralph_Lyddiard?oldid=21625"
Community content is available under CC-BY-SA unless otherwise noted.