Red in Tooth & Claw is the fourth episode of the nineteenth series of the popular ITV crime drama Midsomer Murders and originally aired 18th January 2017.

The discovery of a body covered in live rabbits reveals a sinister side to the local pet show. Is this a rivalry taken too far or is the killer driven by something darker?

Delphi Hartley's annual summer pet show comes to Bellville Hall, and local businessman Timothy Benson is once again working hard to ensure his prize-winning rabbit, Hercules, claims Best in Show. However, shortly after opening, the show is rocked by the murder of local estate agent Seb Huntington, who is found inside the central marquee, covered in live rabbits. His girlfriend, Tegan Langton, who is Delphi's second in command, is left distraught by his death. Meanwhile, Benson is shocked to discover that Hercules appears to have disappeared without trace. Suspicion immediately falls on him and his wife Ailsa  after DCI Barnaby and DS Winter discover that they both have conflicting alibis for the time of the murder. When Huntington's boss, and Tegan's mum, Cleo, is found dead in her car, having asphyxiated from an allergic reaction to rabbit hair which is found inside her air conditioning system, it soon appears that someone has a motive for harming everyone close to Tegan.

Cleo Langton
Died from respiratory failure after rabbit fur was placed in car ducts and allergy medication was removed from purse. 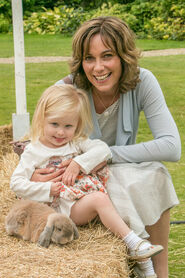 Retrieved from "https://midsomermurders.fandom.com/wiki/Red_in_Tooth_%26_Claw?oldid=26152"
Community content is available under CC-BY-SA unless otherwise noted.