Ring Out Your Dead

Ring Out Your Dead is the fourth episode of the fifth series of the popular ITV crime drama Midsomer Murders. It was first shown on 15th September 2002.

Murder is in the air in the village of Midsomer Wellow as DCI Barnaby and DS Troy investigate the death of Greg Tutt, who was shot through the heart. He was a member of the local bell ringers and a bit of the village lothario who had recently been thrown out by his wife who was fed up with his womanizing. He also had an eye for Emma, engaged to Liam, who are both members of the bell-ringing team. In the mix is Reggie Barton who leads a group of villagers opposed to the bell ringers using the church as a hobby, especially after they have an impromptu concert to celebrate a big win at the track with their pooled funds. When a second bell ringer is killed, Barnaby finds himself trying to connect the recent deaths with church lore that had the vicar killed and dumped in the well by bell ringers over 100 years ago.

Jonathan Ebbrell
Historical murder in 1860. Chased and hit on head by a large church bell that was ringed by bellringers and thrown into a well.

Greg Tutt
Shot in chest with a pistol in bell tower. He then had a note put in his hand which said "DING DONG BELL".

Emma Tysoe
Shot in chest with a pistol right after her wedding through church window. Inside the church was left a note which said "VICAR'S IN THE WELL".

Marcus Steadman
While having an asthma attack his inhaler was thrown in a river and as he was reaching for it, he was pushed in the river with a cane. Earlier that day he received a note which said "WHO PUT HIM IN". 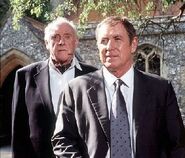 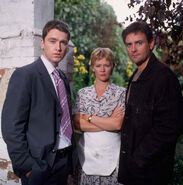 Retrieved from "https://midsomermurders.fandom.com/wiki/Ring_Out_Your_Dead?oldid=25802"
Community content is available under CC-BY-SA unless otherwise noted.