Schooled in Murder is the sixth episode of the fifteenth series of the popular ITV crime drama Midsomer Murders and originally aired on 30th January 2013.

When Debbie Moffett is crushed to death with a giant round of cheese at the home of the world-famous Midsomer Blue, secret and controversial plans to modernise the dairy are revealed while rumours about private lives of the parents cause a row at the prestigious local prep school. As other people linked to the dairy meet agonising deaths, long-held secrets start to emerge.

DCI Barnaby and DS Jones investigate the death of Debbie Moffett, who is found dead at the cheese factory where she worked. She had recently had a run-in with Beatrix Ordish at the Midsomer Pastures prep school after they advised her that her daughter would not be welcome at the school the next term. She was also having an affair with the woman's husband, Oliver. The cheese factory itself was famous for producing Midsomer Blue Cheese, but has been unable to make a profit for some time now. In trying to reduce costs, the owners have upset local milk producers, including Helen Caxton. Several subsequent murders do little to clarify things. Barnaby sees a connection among the various murders however and it leads him to the killer.

Debbie Moffett
A shelf on which were cheese wheels was pushed on top of her, pinning her down and then was killed by a blow to the head with a large wheel of cheese.

Oliver Ordish
Garroted by cheese-cutting wire and then his mouth was stuffed with maggots.

Gregory Brantner
Stabbed through the heart (from behind) with a cheese needle.

Helen Caxton
Hit over the head with a shovel and left to be trampled by cows which were left to gather in a tight barn.

Jim Caxton
After coming to the aid of the unconscious Helen Caxton, was knocked and trampled by cows which were left to gather in a tight barn. 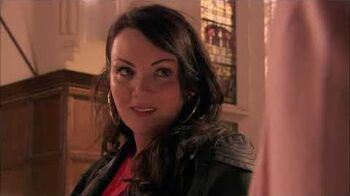 Retrieved from "https://midsomermurders.fandom.com/wiki/Schooled_in_Murder?oldid=26066"
Community content is available under CC-BY-SA unless otherwise noted.