Shot at Dawn is the first episode of the eleventh series of the popular ITV crime drama Midsomer Murders and originally aired 1 January 2008.

The Court Marshall and execution of Tommy Hicks for cowardice during World War I, ignites a feud between the Hammonds and the Hicks, which lasts for 90 years. Duggie Hammond always felt guilty about his forced involvement in Tommy's unjust death. During a ceremony at the village war memorial Tommy's son, Lionel, unveils a plaque for his father. Colonel Henry Hammond, who supported the execution, finds the ceremony farcical and lets his feelings be known. When Henry is later killed, Barnaby and Jones investigate.

The Hammonds and the Hicks have been feuding for over 90 years ever since  Tommy Hicks was found guilty of cowardice under fire and executed by a firing squad commanded by Lt. Duggie Hammond. The Hicks family has managed to have the good name of Tommy Hicks restored, much to the consternation of the elder Colonel Henry Hammond, and the ill-feeling between them continues. The Hicks are nouveau-riche and love sticking it to the landed Hammonds who have their own problems. Col. Hammond's son Johnny is gay and unhappily married to Arabella while their daughter Kate just can't understand why her mother married the man in the first place. Their other daughter Sophie is going to marry Will Hicks to the consternation, or amusement, of both families. When Henry is killed - with Duggie's 1916 pistol - and an attempt to bomb the elder Lionel Hicks goes awry, Barnaby and Jones have a case to solve. There will be another death before they get to the bottom of it however.

Tommy Hicks
In July 1916, after a Courts Martial trial, PTE Hicks was found guilty and sentenced to die by a firing squad commanded by his friend, Duggie Hammond. However, the inept firing squad failed to execute Hicks so the job was left to Hammond, who shot his friend in the head with his pistol.

Royal Midsomer Yeomanry
Killed during The First World War on the battlefield.

Duggie Hammond
Died in 1935 of depression after what he has done to his friend Tommy.

Henry Hammond
Shot in the head with the same pistol used to kill Tommy Hicks, then his wheelchair was remotely guided to crash into an oncoming truck.

Johnny Hammond
As he opened his garage door with a remote, was shot multiple times by an automatic WWI machine gun from distance that was arranged to start by the same remote.

These men fought in The First World War and gave their life to protect their country. This was Tommy Hicks's regiment.

The Men Who Died On The Battlefield 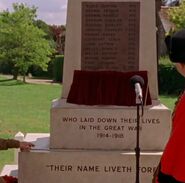 Add a photo to this gallery

Retrieved from "https://midsomermurders.fandom.com/wiki/Shot_at_Dawn?oldid=25594"
Community content is available under CC-BY-SA unless otherwise noted.