Renny Rye
The Animal Within is the second episode of the tenth series of the popular ITV crime drama Midsomer Murders and first aired 19th January 2007.

Faith Alexander travels to Midsomer Deverell to visit her uncle Rex Masters, whom she has not seen in 40 years and learns that he is missing. She also learns that he had told everyone that she and her entire family had been killed in a plane crash the year before. When Rex's body is fished out of the nearby river, Chief Inspector Barnaby and DS Jones investigate if it was murder or possibly suicide. Faith believed that she would inherit Rex's estate based on a will he had drawn up some 4 years earlier. Soon however, it is reviled that Rex was apt to change his will as it suited him with Miles King the gardener, Eileen Carnack the housekeeper and Janet Bailey the cleaner all in possession of a will leaving them the entire estate. While only the most recent version is legally binding, it does mean that several people thought they had something to gain by Rex's death. As well, Rex had quite a reputation as a free spirit so it may not only be those with a will who wanted him dead. There will be two other murders however before Barnaby puts it all together.

Rex Masters
Hit on head and then pushed into Crofter's Weir where he drowned.

Miles King
Stabbed in the chest with a kitchen knife.

Eileen Carnack
Stabbed in the back with a kitchen knife while running away after seeing King's body. 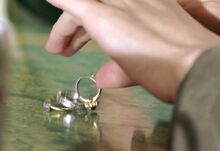 Retrieved from "https://midsomermurders.fandom.com/wiki/The_Animal_Within?oldid=28116"
Community content is available under CC-BY-SA unless otherwise noted.