Renny Rye
The Axeman Cometh is the fourth episode of the tenth series of the popular ITV crime drama Midsomer Murders and was originally aired on 2nd February 2007.

DCI Barnaby revels in the atmosphere of a major rock concert being held in Badger's Drift that features Hired Gun, an influential rock group from his youth and his personal favorite. Barnaby is soon on the job when the group's lead singer, Mimi Clifton, is electrocuted on stage during their opening number. It is quickly apparent that the equipment was tampered with and they are dealing with a case of murder. Gary Cooper, the group's nominal leader, believes the attempt was directed at him as he has been harassed and threatened for some time. He thinks his nemesis is former band member Ginger Foxton who disappeared 30 years ago, a case the then Det. Sgt. Barnaby and his DI Owen Jenkins, had worked on. When an attempt is made on a second member of the group and then a third, successfully this time, Barnaby thinks Cooper might be right. Revenge is at the center of it all, but not for the reasons that seem apparent.

Ginger Foxton
Committed suicide by driving car off cliff into a quarry. Suicide occurred 30 years ago.

Mimi Clifton
Electrocuted while singing by the microphone stand that had been wired to live electrical wires through a small hole in the stage that was drilled the night before. The current was started by pressing an amplifier pedal.

Nicky Harding
Smothered with a pillow while sleeping in the back of his Cadillac and then the car was driven into a swimming pool. 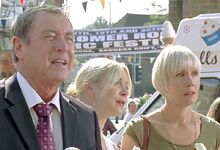