Peter Smith
The Black Book is the second episode of the twelfth series of the popular ITV crime drama Midsomer Murders and originally aired on 26th March 2009.

Felicity Law auctions a painting by eighteenth century Midsomer artist Henry Hogson for £400,000, giving most of the money to Matilda Simms, who runs a therapeutic art school, inherited from her father. Felicity is murdered, as is a young thief who had stolen another Hogson, causing Matilda to confess that both paintings were forged by her father. A greedy gallery owner tries to blackmail the killer and is himself slain. All three victims were, variously and dangerously, in possession of the forger's notes, kept in The Black Book.

Henry Hogson
Died in 1810 from arthritis.

Felicity Law
Tortured by having her hand held on the hotplate, then had her throat slit.

Graham Spate
Knocked unconscious and tied to a table. He was then tortured with a razor blade and finally killed by repeated blows to the head.

Anthony Prideaux
After getting up from his desk, was held from behind and had his throat slit with a razor blade, then pushed on top of the desk. 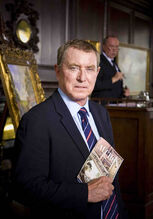 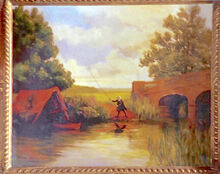