Nick Laughland
The Christmas Haunting is the first episode of the sixteenth series of the popular ITV crime drama Midsomer Murders and first aired 24th December 2013.

DCI Barnaby and DS Nelson investigate the fatal stabbing of a man with an antique sword during a ghost-hunting party at a ‘haunted’ manor house. Is blacksmith’s daughter Rose Wilton seeking revenge from the beyond the grave, or can Barnaby and Nelson find a more earthly motive behind the murder and trap the killer?

As Christmas descends on Morton Shallows, a new Detective Sergeant arrives in the name of Charlie Nelson. However, unrest soon breaks out as local furniture maker and serial philanderer Conor Bridgeman is stabbed to death with an antique sword during a ghost-hunting party. The owner of the house, Simon Fergus-Johnson and the rest of his family are astonished when they discover their new venture has gone horrifically wrong. Brendan Pearce, a local historian, is quick to accuse the blacksmith's daughter, Rose Wilton. But there's just one problem; Rose is a ghost...

Conor's widow Mel is stunned to learn he was cheating on her with her singing teacher, Felicity Hearn. More secrets are spilled when it appears Conor had attempted to negotiate with Fergus to buy the haunted manor, but the discussion was fractious. Beliefs continue to lure in the air when Ross Clymer, landlord of local pub Blacksmith Arms, brands his pub as an "original haunted site". There's also a recording of the night Conor died, with a ghost-like girl's voice in the background.

Simon's wife Tabby keeps close contact with Ross. Brendan has high hopes that Conor's death will boost the café and shop he runs with wife Libs. Valerie Fergus-Johnson gets in contact with Barnaby, and tells him that she was her father's carer from the age of thirteen, and that Simon had toured the world before inheriting the manor. Simon and Tabby row as the manor lies in disorder, ignoring daughter Pippa. Pippa decides to wonder off, going in search for Dev Kardek, a student obsessed in the paranormal. When she finds him he seems busy writing his PhD.

Army major Ollie Tabori returns to the village of Morton Shallows, and instantly searches for Valerie. When Ollie arrives in the pub, Ross is furious and chucks him out. Pippa and Dev plan a vigil regarding part of their studies. As night dawns, the pub is in lock-down where Ross prepares to search for the ghost in his pub. He is joined by several residents. Nelson stands by as the lights are switched off and the hunt begins. He sees something and head off to investigate, trapping Felicity who is playing the tape of the ghostly girl's voice. As the lights are switched back on and the residents gather, they realise Ross is missing. He's been bludgeoned to death with a blacksmith's hammer.

Nelson later discovers that Ollie is in fact Mel's brother, and was once Valerie's lover. He also discovers Ollie was sent off after causing an accident. However, Ollie never did cause the accident as the real culprits were Conor and Ross. Ollie then went AWOL from the army, suffering PTSD. Is Ollie actually seeking revenge? Brendan disappears, but he's taken cash with him.

Nelson learns Dev tricked Pippa, as his PhD is truly about paranormal gullibility. Suddenly the mystery pieces together and Barnaby and Nelson realise who's really behind these killings. They rush towards supposedly-haunted caves, where Pippa plans a live transmission to mark the one-hundred-and-twenty-seventh anniversary of Rose. But will they arrive in time? Or will the killer strike a third time?

Little Rose Wilton (Blacksmith's Daughter)
Got caught in a snowstorm and froze to death near the Devil's Dungeon 127 years ago.

Mr. Fergus-Johnson
Died from a stroke which was triggered 1 year after his wife died.

Conor Bridgeman
During a paranormal investigation a door was slowly opened and as he approached it was stabbed in the costal cartilage and then in the heart with an antique sword which was allegedly made by the blacksmith himself.

Ross Clymer
During a paranormal investigation the door to his walk-in freezer was left open and as he approached it was killed by a blow to the head with a blacksmith's hammer. Then he fell or was pushed inside and the door was closed to echo the ghost story. 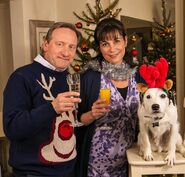 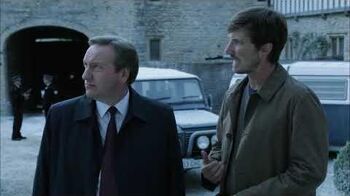