The Electric Vendetta is the third episode of the fourth series of the popular ITV crime drama Midsomer Murders and originally aired on 2nd September 2001.

While the some of the residents of Midsomer Parva have a particular interest in the appearance of crop circles, the police have a definite interest when the bodies of naked men start appearing in them. Local UFOlogist Lloyd Kirby preaches that extra-terrestrials are at work, but DCI Barnaby looks to more earthly explanations. The first victim, Ronnie Stokes, was a criminal with several serious convictions for assault while the second, Eddie Field, was a local burglar who had only just been released from prison and who may have committed another burglary the night of his death. Both men were electrocuted and were killed elsewhere, with their bodies moved to the crop circles. When a third man is electrocuted, Barnaby must learn of a complex series of events and inter-relationships, some from 40 years previously when two men loved the same woman, to solve the crimes.

Ronald Stokes
Accidental electrocution from an electric trap while trying to escape Christian Aubrey's house and then his body was placed in a crop circle and made to appear as if he had been abducted by aliens.

Eddie Field
Accidental electrocution while stealing electricity for his furnace in Midsomer Parva's foundry and then his body was placed in a crop circle and made to appear as if he had been abducted by aliens.

Steve Ramsey
Electrocuted while starting his truck after it had been connected to a power transformer. The car was then moved a few yards away from it.

Lloyd Kirby
Broken neck after being pushed down a flight of stairs. His body was then stripped and left in a crop circle.

Dave Ripert
Crashed his car into a combine harvester and was thrown through the windshield. 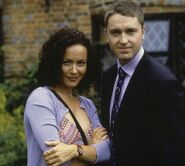 Retrieved from "https://midsomermurders.fandom.com/wiki/The_Electric_Vendetta?oldid=25457"
Community content is available under CC-BY-SA unless otherwise noted.