Peter Smith
The House in the Woods is the first episode of the ninth series of the popular ITV crime drama Midsomer Murders and originally aired on 9th October 2005.

Assisted by acting DC Ben Jones, DCI Barnaby investigates the murders of Caroline and Peter Cave who had been in the village of Midsomer Newton looking for a house. They are found outside an abandoned home, Winyard, owned by Charlie Magwood and which has a reputation for being haunted. Magwood has been trying to sell the place but without success, due at least in part to his unscrupulous estate agent who has her own plans for the place. When told that Winyard actually belonged to Charlie's jailed brother Jack, Barnaby also comes to the conclusion that there is someone secretly living in The House in the Woods.

P.C. Colin Armstrong
Shot with a gun 18 years ago.

Mr. and Mrs. Barrett
Died of depression after seeing Jack going to prison for the murder of P.C. Colin Armstrong.

Caroline Cave
Garroted with a piano wire while sitting in her car.

Peter Cave
Garroted with a piano wire after getting into his car.

Harriet Davis
Garroted with a piano wire while sitting at the table inside Winyard estate. 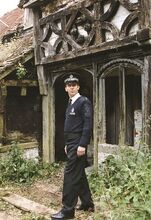