Jeremy Silberston
The Killings at Badger's Drift is the pilot episode of the popular ITV crime drama Midsomer Murders and was originally broadcast on 23rd March 1997.

The episode was adapted from the novel of the same name by author Caroline Graham and was screenplayed by Anthony Horowitz, who was also well-known for adapting dramas such as Foyle's War and Agatha Christie's Poirot. It was directed by Jeremy Silberston. It is the first appearance of Detective Chief Inspector Tom Barnaby and Detective Sergeant Gavin Troy, played by John Nettles and Daniel Casey respectively.

When Emily Simpson is found dead in her house, DCI Barnaby's instincts all lead him to suspect murder. Although she was elderly and everyone seems to have liked her, it seems she may have seen something in the woods that she shouldn't have. There are numerous suspects: the local doctor who lies about his alibi, Iris Rainbird, the local busybody who seems to live beyond her means or her son Dennis, who is the local undertaker. Barnaby also receives information that a death the previous years may not have been an accident. When two other residents of Badger's Drift are murdered, Barnaby uncovers an illicit love affair that the protagonists must keep secret.

When gentle spinster Emily Simpson is murdered in her own home in the seemingly tranquil village of Badger's Drift, it attracts the attention of DCI Tom Barnaby and DS Gavin Troy of Causton CID. When her friend, Lucy Bellringer, is unconvinced that Miss Simpson died of natural causes, she voices her suspicions. Suspects include Iris and Dennis Rainbird, the Lessiter family, which includes Trevor, the local GP, his wife Barbara, and daughter Judith . Other persons of interest are Henry Trace, the landowner and is engaged to young Katherine Lacey; his estate manager is David Whitely, Katherine's artist brother Michael, and Phyllis Cadell. Barnaby also learns of the shooting of Henry's first wife Bella almost two years ago.

Mr. Lacey
Died in a car accident with his wife 9 years ago.

Mrs. Lacey
Died in a car accident with her husband 9 years ago.

Bella Trace
Lured to an open spot and shot in the chest with a shotgun from distance on the 26th of June 1995.

Emily Simpson
Broken neck after being struck from behind and the body was arranged at the bottom of her stairs to appear as natural causes/an accident.

Iris Rainbird
Stabbed multiple times in the chest and neck with a butcher's knife right after Dennis.

Katherine Lacey
Shot with a shotgun - part of the suicide pact with Michael.

Michael Lacey
Committed suicide by shooting himself with a shotgun after "helping" Katherine. 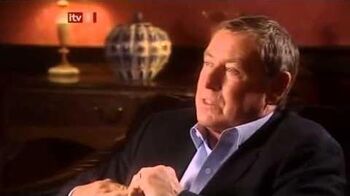 Midsomer Murders - How it all Began E01

The following actors and actresses from the pilot episode of the series have appeared in subsequent episodes: