The Maid in Splendour

The Maid in Splendour is the fifth episode of the seventh series of the popular ITV crime drama Midsomer Murders and originally aired on 25th January 2004.

Jamie Cruickshank, a bartender at the Maid in Splendour public house, is keen on Bella Monday, a barmaid, and follows her to a tumbledown old cottage in the woods, only to be blasted with a twelve-bore shotgun. Then the pub landlord's son, Stephen Bannerman, is also killed in the same way. Barnaby finds there was ill-feeling between locals and newcomers to the village and also between the landlord and his aggressive son, who was in the process of taking over the business.

DCI Tom Barnaby and DS Dan Scott investigate the shotgun murder of Jamie Cruikshank, a barman at the Maid in Splendour, a pub in the village of Midsomer Worthy. The pub is now owned by Stephen Bannerman, a much disliked local property developer who has his own plans for the pub. Bannerman's father Michael, the original owner, didn't agree with his son's plans to turn the pub into a high end restaurant nor of his affair with Bella Monday, the daughter of his lifelong friend Audrey. When Stephen is subsequently killed, also by shotgun, Barnaby begins to wonder if Cruikshank's murder may have resulted from a case of mistaken identity.

Jamie Cruickshank
Shot twice in back with 12 gauge shotgun. 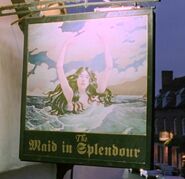 The Tale of The Maid in Splendour

Michael Bannerman: "A young knight goes off to the crusades before he can marry his beloved and she vows to wait for him, but by the time he gets back, he's old, broken by the war. She's still beautiful as ever, hasn't aged a day. So, to release her from her obligation, he dives into Lake Splendour and drowns."
Tom Barnaby: "Lake Splendour?"
Michael Bannerman: "That's a stagnant pond up by the Hunter's Wood. The name's ironic, at least it is these days."
Dan Scott: "So the knight chucks himself in the pond, end of story?"
Michael Bannerman: "No, no, no, the maid was brokenhearted, she still loved him, you see, despite his age and infirmity, so she threw himself in the lake after him. Hence, 'The Maid in Splendour'."
Dan Scott: "That's what I like, a happy ending."
— Michael Bannerman's version of the Maid in Splendour tale which Dan seems to like.

Benbow: "The old night came back from the crusades. He goes straight to the manor and there he sees her pleasuring his brother. So he drags her up from the bed, kills his brother stone dead, and then chucks girlie into the lake."
Tom Barnaby: "Now that's what I call a happy ending."
— Benbow's version which Tom finds more acceptable.

Retrieved from "https://midsomermurders.fandom.com/wiki/The_Maid_in_Splendour?oldid=25322"
Community content is available under CC-BY-SA unless otherwise noted.