The Sicilian Defence is the fifth episode of the fifteenth series of the popular ITV crime drama Midsomer Murders an originally aired on 9th January 2013.

Harriet Farmer wakes up after being in a coma since the night she tried to elope. Soon afterwards, a serial killer strikes members of a chess club. Could the attack which left Harriet for dead a year ago be linked to moves on a chess board? And where is her boyfriend Finn?

A year after Harriet Farmer was knocked unconscious in the woods near her home, she regains consciousness. Her memory is a bit foggy and she doesn't quite remember the night she was attacked. Her father, David Farmer is thrilled however, even though she was running off to marry Finn Robson, who has since disappeared. DCI Barnaby and DS Jones have another murder to solve when Edward Stannington, head of the Bishopwood chess club, is found dead having been stabbed in the back. Stannington was generally disliked in the village having turned down a business offered by Arthur Potts and generally mistreated his aunt, with whom he shared a house. He had also been conducting research on Alan Robson, Finn's father, who made his fortune developing a computer chess game. When David Farmer is found dead, Barnaby is convinced the two cases are linked.

Jason Winters
Committed suicide with an overdose of barbiturates in 1993 after realizing that he had been swindled out of the rights to the computer game he had created.

Marion Green
Died of breathing complications that was determined to be a natural cause of death after being served a meal of Chicken Korma which was prepared by Caroline Potts 6 months ago.

Edward Stannington
Stabbed in the back with a large pick that is used for ice climbing. He then had put in his mouth notes which described half of the chess moves Jason used to defeat Kostelov.

Jack Barton
Died of cardiac arrest which was determined to be a natural cause of death while eating a meal of Goulash which was prepared by Caroline Potts.

David Farmer
While he bent down in his car to get a cross jewelry, was strangled with a smooth rope, possibly a climbing rope. He then had put in his mouth notes which described half of the chess moves Jason used to defeat Kostelov. 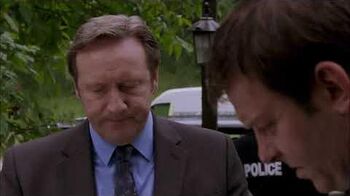 Retrieved from "https://midsomermurders.fandom.com/wiki/The_Sicilian_Defence?oldid=26071"
Community content is available under CC-BY-SA unless otherwise noted.