The Sting of Death

The Sting of Death

The Sting of Death is the third episode in the Twenty First series of the popular ITV crime drama Midsomer Murders. It was first streamed in the U.S. on 1 December 2019 on streaming services Acorn TV and Britbox. It aired on ITV1 in the U.K. on 21 March 2021.

DCI Barnaby and DS Winter are called to the stately home of a master beekeeper after he is injured attempting to apprehend a thief. The village of Granville Norton is abuzz with news of the missing bees, and suspicions fly when one of the locals is stung to death.

Justin Drylaw
Died from a silent heart condition in London.

Dr. Serena Lowe
Knocked unconscious by a blow to the head with a metallic bottle which had a hexagon on its bottom and taken outside. Her head and throat were then covered in liquid swarm lure and the nearby swarm that was on the loose was attracted with a torch, stinging her to death. Prior a candle labeled "Doctor" was lit and after the murder it was blown off.

Cal Ingalls
Knocked unconscious by a blow to the head with a metallic bottle which had a hexagon on its bottom and injected with a fatal dose of bee venom in his neck. He was then taken to his home gym, strung up on ropes and had a lighted beeswax candle put on top of his head which melted and covered his body. Prior a candle labeled "Deceiver" was lit and after the murder it was blown off. 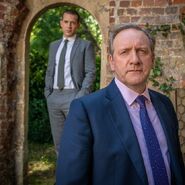