The Village That Rose from the Dead

The Village That Rose from the Dead is the first episode of the nineteenth series of the popular ITV crime drama Midsomer Murders and originally aired 18th December 2016.

Abandoned by the army, who took it over in World War II, the village of Little Auburn is to be reoccupied, with three groups of people submitting ideas for its resurrection. When Finn Thornberry, who with girlfriend Corina Craven had opted for an eco-friendly village, is killed, DCI Barnaby and new sergeant Winter discover he had a secret wife nobody knew about. Of the rival bidders, elderly Sylvia Lennard, seeking to restore the village to former glories, hated the deceased, but property developers Blake and Lucy Keswick claim to have had no argument with him. Corinna's father Roderick , who was to judge the worth of each party, is the next victim, and oddly, Finn's mother Andrea is his main beneficiary. With the discovery of an illegal snake farm and more secrets unfolding, Barnaby must decide whether greed or passion accounted for the murders in The Village That Rose from the Dead.

Little Auburn, a village that has been abandoned since the second world war, is re-opened to the public for the first time in over seventy years. But on the night of opening, local youngster Finn Thornbury is found crushed to death by a tank. Suspicions fall on factions of rival bidders who are all trying to propose plans for redeveloping the village, including museum owner Sylvia Leonard and property developers Blake and Lucy Keswick. Finn's girlfriend, Corina Craven, is left torn, as her father, Roderick Craven, is the head of the judging panel who will eventually decide who will take the rights to Little Auburn's redevelopment. But when he is later found murdered, the identity of the latest beneficiary of the village comes as a shock to all of the villagers. Meanwhile, DCI Barnaby's new sidekick, DS Jamie Winter, arrives in Midsomer, and immediately strikes up a relationship with Kam. Barnaby also finds himself on the lookout for a new dog, following the unexpected passing of Sykes.

Finn Thornberry
Knocked off his bike and then run over by a WWII era Tank.

Roderick Craven
Lured into a foxhole and then poisoned with cyanide.

Milo Craven
Knocked unconscious by a blow to the head and then dragged into a room full of snakes. Ultimately killed by snake constriction. 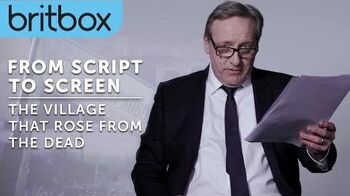 Retrieved from "https://midsomermurders.fandom.com/wiki/The_Village_That_Rose_from_the_Dead?oldid=26160"
Community content is available under CC-BY-SA unless otherwise noted.