Detective Chief Inspector Tom Barnaby is a fictional detective created by Caroline Graham. DCI Barnaby is featured in the Chief Inspector Barnaby book series which began with The Killing at Badger's Drift in 1987. Barnaby is also the main detective in Midsomer Murders, a popular television show based on the novels. There, Barnaby is played by John Nettles (who also has acted in the British crime series Bergerac).

In both the books and the television series, DCI Tom Barnaby is based in the fictional town of Causton in the south-east of England. From that base of operations, Barnaby travels out into the English countryside to solve murders as they occur in a variety of small villages. A genius in the field of criminal investigation, he is a highly experienced and methodical detective; prone to taking his time. However, despite his slow and steady nature, he is an extremely perceptive and sagacious individual, detecting even the smallest of clues, which ultimately aid him in solving the gruesome and barbarous crimes which are committed in the county of Midsomer. It is worthy of note that in many cases, he has already reached a conclusion as to the identity of the murderer; only to reveal this fact later on after he has accumulated enough evidence. Barnaby has been happily married to Joyce for many years, and they have an adult daughter named Cully. They may have lived or worked in London at one point, as around the time of their wedding Barnaby was trying to solve the case of the Pimlico Poisoner.

Thomas Geoffrey Barnaby was born on the 20th April 1943. In 1973 while investigating the case of the Pimlico Poisoner, Tom and Joyce were married in a London registry office. [1] Their only child, a daughter, was born in 1978 who they named Cully.[2] In addition to his wife and daughter viewers are introduced to his maternal aunt, Alice Bly, his mother-in-law, Muriel, his father-in-law, Douglas, his son-in-law, Simon Dixon, and his cousin DCI John Barnaby of Brighton CID.

DCI Barnaby's life in public service began after his graduation from Police College when he was recruited by MI-6. [3] The length of his service with MI-6 is unknown, however by the mid-1960s Barnaby had left MI-6 and joined the police force. DCI Barnaby and his best friend Jack Colby joined the police force on the same day; eventually both rose to the rank of Sergeant with Colby remaining a uniformed sergeant, and Barnaby transferring to CID, although he was stated to be a detective constable with Midsomer Constabulary[4] in 1987 while investigating the death of a homeless man near Midsomer Mere, he ensured the release of Little Mal Kirby[5] as there was no evidence against him. However this could have been a temporary stint in CID, before returning to the uniform branch to gain his Sergeant stripes.[6][7] Returning to CID, the now Detective Sergeant Barnaby was placed under the supervision of Detective Inspector Owen Jenkins. DI Jenkins and DS Barnaby investigated the disappearance of Ginger Foxton one of the members of a jazz band known as Hired Gun which was solved some thirty years later, during "The Axeman Cometh".

Sometime after a brief time in another police force, between 1991 and 1992[8] DS or DI Barnaby was transferred back to Causton CID in Midsomer County.[9] He was promoted to DCI between 1994 and 1995[10]. He could have replaced DCI Lambert[11] in this position. In 1995, some key evidence in a murder case went missing—Barnaby took the blame as he was the investigating officer. His old school friend Sir John Waverley spoke up for him[12].

Detective Chief Inspector Tom Barnaby is a kind, honest, and hardworking middle-aged policeman who often stands out from his fellow fictional detectives on television and in the novels, in that he is very ordinary and does not use violence to interrogate his suspects. Another thing which makes him stand out is that he is also a family man, being married to Joyce and having a daughter Cully, whom he gets on well with—which is also a rarity with most detectives in crime fiction. Tom Barnaby is a policeman who takes his time when it comes to solving a murder.

Throughout the series, Barnaby often wears smart three-piece suits and ties. He has blue eyes, although in the novels they are brown. He is dedicated to his job and his family, and they support him at every turn.

As a DCI one of Barnaby's duties is to train and guide the development of the Detective Sergeants who assist him, and act as his partner. DCI Barnaby has had three partners. The first of his partners is Detective Sergeant Gavin Troy, who serves alongside Barnaby until he is promoted to Detective Inspector, after which he is transferred to a new post at the conclusion of "The Green Man". In the next episode, "Bad Tidings", viewers are introduced to Troy's replacement, Detective Sergeant Daniel Scott, who comes to Causton CID after being re-assigned from the Metropolitan Police to the Midsomer Constabulary. The reasons for Dan Scott's re-assignment to Midsomer and his abrupt departure from the series during the interim between "Midsomer Rhapsody" and "The House in the Woods" have never been explained. Scott's absence, as noted in "The House in the Woods" requires DCI Barnaby to make a brevet appointment, he appoints PC Ben Jones as Acting Detective Constable. The appointment becomes permanent when Jones is transferred into CID. Subsequently, during "Last Year's Model" Jones earns his promotion to Detective Sergeant.

Gavin Troy is Barnaby's first partner in the series and it is evident that they have known each other for quite some time before the events of "The Killings at Badger's Drift". The pair get on well and have a warm relationship. Barnaby finds a few of Troy's habits irksome. Two stand out most and those being his hapless driving as well as his non-politically correct remarks, to which Barnaby corrects him. Of the two it is Barnaby who normally solves the crimes after Troy makes the wrong conclusions. However, their working relationship only became a little bit strained when Troy and Cully found the next body in "Death and Dreams". He was not happy about having to question his own colleague and daughter, and was unaware that the pair had also shared a kiss when Gavin was trying to show off to Cully. Afterwards, the relationship returns to normal. In "The Green Man", Troy is promoted to Detective Inspector and transferred to Middlesbrough. He returns to Midsomer, making an additional appearance, to attend Cully's wedding to Simon Dixon in "Blood Wedding".

Dan Scott has short hair and dark eyes. To his surprise, he enjoys working with Barnaby and, sometimes, solves the case himself.

Ben Jones has short brown hair and dark eyes. He enjoys working with Barnaby and, sometimes, solves the case himself. There is at one point when Tom mentions that Joyce suggests that he would be very good for the Midsomer Worthy Choir.

Joyce is Barnaby's wife. She is known to have an interest in many things, depending on the focus of the episode—including painting, singing, tango dancing, arts appreciation, drama, cycling, running, cooking, charity work and crafts. There is at one point when she is taking part in the Midsomer Worthy Choir and she recommends that DC Ben Jones joins after she and Tom hear him singing in the shower in "Death in Chorus".

Cully is Tom and Joyce's only child who appears frequently throughout the series. She is an actress, though in some episodes she has taken local jobs to help pay the bills. Though she has no interest in pursuing police work, she will occasionally help out her father in relation to his current case. Cully is quite close to both her parents, and she and Barnaby have a warm relationship.

Tom Barnaby's cousin John makes his first appearance in "The Sword of Guillaume", where he is based in Brighton CID. He has a bluff and ironic personality but the two have a warm relationship. They join forces to solve the murders of both Hugh Dalgleish and Jenny Russell (whom Tom also had an amicable relationship with). The real reason for Tom going to Brighton was that he was suspicious of the plans of the mayor of Causton, Dave Hicks, who was going to buy up coastal lands for holiday chalets. Tom is older than John and when Tom announces he is retiring, John is transferred to Midsomer. This happens in the episode, "Fit for Murder" where Tom is celebrating his birthday with his family and colleagues. John then says he is sorry to break up the party but that the vicar over at Badger's Drift has been found hanging from a bell rope. Badger's Drift was the scene of where it all began, and it shows that even with Tom, now retired, murder will no doubt continue in Midsomer as John Barnaby takes over.

Tom Barnaby is likely to have known Sarah for some time even though they have never encountered each other throughout his time on the show.

George is the former medical examiner and colleague, who helps Tom Barnaby solve murders. He and his wife Catherine are close family friends. 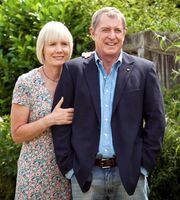 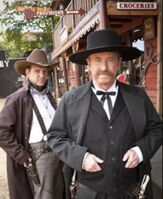 Retrieved from "https://midsomermurders.fandom.com/wiki/Tom_Barnaby?oldid=28227"
Community content is available under CC-BY-SA unless otherwise noted.