With Baited Breath is the fourth episode in the Twenty-First series of the popular ITV crime drama Midsomer Murders. It was first streamed in the U.S. on 1 December 2019 on streaming services Acorn TV and Britbox, with its UK release date announced as 28 March 2021 on ITV1.

Tensions run high in the village of Solomon Gorge when a fishing competition and extreme obstacle course are scheduled for the same weekend. With each group attempting to sabotage the other, it's not long before someone's life is on the line.

The village of Solomon Gorge hosts a Fishathon, a fishing competition with a $20k prize for the legendary monster fish Ahab. Despite assurances against it, the Fishathon occurs at the same time as the Psycho Mud-Run, an extreme obstacle course/race. Consequently, at the last minute, Ned Skye reroutes the obstacle course.

Detective sergeant Jamie Winter and constable Jade-Marie Pierce compete in the Psycho Run for the Causton CID. Lex Bedford leads the charge for his team in the Causton Fire Department.

The obstacle course is extreme. One challenge includes a thick curtain of numerous fishing lines hanging into the lake, each containing a small electric charge. At night, Fireman Lex Bedford is lured to the lake for a private meeting. As he enters the fishnet curtain, someone throws the switch on. He is electrocuted. Soon enough, another murder occurs (Ned Skye) in typical gruesome fashion —— and then another murder (fisherman Cornelius Tetbury). . . And the race is on.

As it turns out, everything hinges on an old murder that occurred in the village ten years ago.

Lola Silvermane
Run over by a Jeep, then put inside it and the Jeep was pushed into the lake 10 years ago.

Lex Bedford
Lured to an electric jungle obstacle in the Mud Run Race and as he was crossing it, the obstacle was turned up to a higher, lethal current, electrifiing him to death.

Ned Skye
Killed in the woods and his body was then taken to a fishing shop and placed in a barrel containing bait grubs.

Cornelius Tetbury
Shot in the back of the head with a slingshot while wearing Griffin's hat. His body was then dragged to a bait freezer and dumped inside. (Not the intended victim) 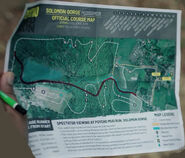