Series One, Episode One

Jeremy Silberston
Written in Blood is the first episode of the first series, the second overall after the pilot, of the popular ITV crime drama Midsomer Murders and first aired 22nd March 1998.

Gerald Hadleigh, secretary of a writers’ circle, is found battered to death the morning after the group’s meeting with best-selling novelist (and former psycho-therapist) Max Jennings. Gerald did not want to invite Max to Midsomer Worthy, and he seemed apprehensive about the visit. Barnaby’s investigations show that Gerald was a man of mystery—he had no National Insurance number, no family, and no marriage certificate to go with his wife's photograph. And it seems he had a mysterious woman visitor on the night of his death... then Max Jennings goes missing and is found dead.

The Midsomer Worthy Writers Circle invites well-known author Max Jennings to one of their monthly meetings. The group's secretary, Gerald Hadleigh is opposed to the invitation but is outvoted. It becomes apparent that Jennings and Hadleigh knew one another at one time. When Hadleigh is found dead the next day, Barnaby and Troy begin looking into the backgrounds of the various Circle members and try to locate Jennings. When they do find him he is, as they say, incapable of assisting them with their inquiries. A second murder adds to the puzzle but in the end, the solution rests on learning of long-ago events and a hidden family secret. At home, the Barnaby's agree to care for daughter Cully's Russian Blue cat Killmouskie, with interesting results for Tom.

Mr. Hanlon
Shot with his own shotgun while laying in bed. This occurred in 1955 in Durrow, Southern Ireland.

Ralph Lyddiard
Died from AIDS. After his death his body was taken, put on a bed and kept in a room in his sister's mansion.

Gerald Hadleigh
Bludgeoned with a candlestick, stripped and had his cupboard emptied from his dresses.

Max Jennings
Given a poisoned drink. [1] 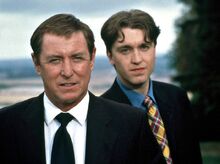