Written in the Stars

Written in the Stars

Renny Rye
Written in the Stars is the third episode of the fifteenth series of the popular ITV crime drama Midsomer Murders and was first aired 25th September 2012.

DCI John Barnaby and DS Ben Jones investigate the murder of 42 year-old Jeremy Harper who was struck on the head with a rock - a piece of meteorite actually - on an outing on Moonstone Ridge with the Midsomer Stanton Astronomical Society to observe a total eclipse of the sun.

During a local eclipse of the sun, Jeremy Harper, one of a group of amateur astronomers, is killed on Moonstone Ridge by a blow to the head with a meteorite. Jeremy had rowed with Lawrence Janson, head of the university observatory over plans to extend the observatory onto the ridge but was unaware of his wife Catrina's affair with Janson. Local clairvoyant Mags Dormer had warned Jeremy of impending disaster and tells Barnaby that Moonstone Ridge is cursed, since Catrina's sister Mary, wife of pharmacist Harry Dutta, also died there some years earlier. Then other murders occur, of members of the group who were opposed to Janson's plans but had also made a discovery of their own, leading to a resolution of the case written in the stars.

Tom Stanton
Died of natural causes in the 20th century.

Mary Dutta
During an altercation she tripped and fell down a fling of stairs 15 years ago. Her body was then taken and left at Moonstone Ridge.

Jeremy Harper
Struck on the head with a piece of meteorite from Moonstone Ridge.

Peter Groves
Struck in the chest by a thrown spear whose tip came from Moonstone Ridge and was stolen from the Stanton Museum. The spear was then brought out, put in his hands and the body was arranged to represent the Scorpio constellation.

George Dormer
Throat was impaled by a thrown moonstone disk which triggered cardiac arrest. The disk which originated from Moonstone Ridge, was stolen from the Stanton Museum, the pattern on it which represented the Scorpio constellation was polished and its edges were sharpened prior. 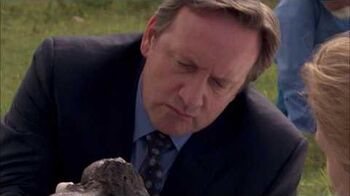